With the first Edinburgh Festival of Cycling kicking off mid June showcasing a whole 9 days of bike related events, the capital turned into a bicycle mecca. Everything from a 24 hour charity spin to a bike poetry slam, the Voodoo Unicycle Display Team to bamboo bicycle building, there really was something for everyone. We also got in on the action; getting up at 2:30am to help serve breakfast after the night ride and preparing the skills track for heels on wheels day at the Meadows. Everyone involved had a great time… lets hope it becomes an annual event!

The weather took a turn for the worse on the third week of June and bike tours didn’t seem to be at the top of everybodies holiday agenda. Although, there were still some adventurous individuals holidaying in Edinburgh who wouldn’t let a threatening cloud come between them and chance of a memorable Tartan Bicycle Company tour. Among them, a gentleman from Lithuania, who was only in town for one day, prioritised a bike tour of the bridges and the Edinburgh coastline over a walk down the High Street and a visit to the castle… Good choice!

On more a more personal note; my wife, Marije and I celebrated our long awaited wedding party in the Netherlands last weekend. We actually got married in February 2013, opting for a small ceremony in Edinburgh followed by a bigger party at Marije’s family home in Holland. We had the most amazing time in the company of family and friends, with the sun gods smiling down on us in the most beautiful of Dutch rural settings.

Johann picked us up from our Airbnb and dropped us off there at the end, which was super convenient. The tour lasted about 3h, easy/medium and the bikes were... read more nice and easy to use. We saw much of the city, and the surrounding areas. Johann...More 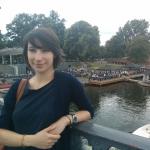 At Last, Some Time to Reflect

Bike tours, events, challenges and other stuff!
Scroll to top